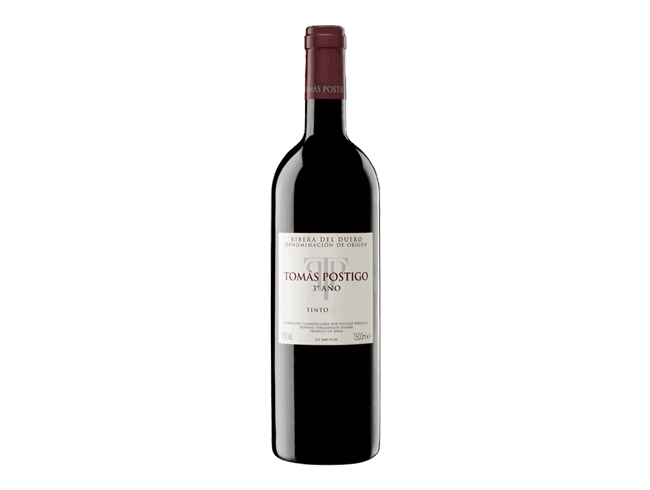 It has been many years since Tomás, one of the most venerable winemakers in Ribera del Duero with more than 35 vintages to his name, began to instill in his children all his knowledge and love for wine. The four have grown up in the winery, in a special environment learning the importance of a job well done, prioritizing quality and focus on every detail, all paramount in Ribera del Duero. Made up of Tomás and his four children Gabriel, Alberto, Juan and Nicolás. Their passion for wine was passed on by their father and that means that all of them are already involved in the running of the winery, from the oldest to the youngest, thus bringing together tradition and continuing down the generations.

This unique blend of 4 different grape varieties comes out of 56 different wines, all produced with different characteristics, depending on the vineyard, varietal and oak. This wine became the final blend of all of them and is a blend of Tempranillo, Cabernet Sauvignon, Merlot and Malbec. The 12 months of oak aging gives the wine a different layer of structure and fruit, well balanced and intertwined. 2018 was a an extraordinary year for Ribera del Duero. The spring was the wettest and rainiest in Spain since 1965, however, free of frost and with moderate temperatures. Bud break was spectacular in quantity as well as the final production. After fairly moderate temperatures in May and June, a slow ripening season was expected, but towards the end of July and into August seasonal temperatures and some heat waves advanced the ripening to the normal path. Despite spring humidity as well as some summer storms, cluster health was not affected. September was a miracle, it was the warmest since 1965 in Spain, with spectacular day-night temperature changes, giving the grapes a unique level of complexity.

Tasting note
On the nose, highlights of mature of black and red fruits, red plums while also notes of earthiness, freshly cut wood and sweet spices such as vanilla with a subtle toasted aroma. Mouthfeel leads to a good acidity, easy drinking but well structured and very fruity with sensations of red fruit (currants) and fine toasted oak. A full range of flavors, coinciding with soft and ripe tannins. Long, with a very fruity finish in the mouth, pleasantly aged and a nice balance between the acid and the alcohol.

Vinification
Everything is harvested into 10 kilo boxes, reducing the bruising of the fruit. After staying in a cold chamber, the clusters to trough a selection proces done by hand. In the winery they moved everything gently using our gravity flow system. This prevents oxidation and ensures that the whole trape is intact. The grapes were de-stemmed and had whole berry

Ageing potential
Store the wine bottles in a cool, dark place, between 14ºC – 16ºC, lying down. If storing the wines at home and not in a cellar or climate fridge, it is recommended to consume within a year.